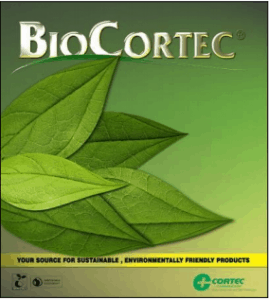 Scientists around the world have been alerting us to the importance of replacing synthetic chemicals (among the major causes of pollution on the planet) with green alternatives enabled by technological innovations. Thanks to committed research, study, and experimentation, today tat Cortec® we know more than ever before about producing ecologically harmonious corrosion control solutions. As technology advances, we continue to expand our unique eco-conscious offerings. These products do not destroy the natural balance of the environment and in many cases are functionally superior to conventional petroleum derived products, thus presenting more responsible and practical solutions.

Among our exciting film developments are Eco Works® 10 and 30, biobased films and bags (10% and 30% biopolymer, respectively) certified for composting in a commercial composting environment (BPI certificate #890974), and Eco-Corr Film® , a corrosion inhibiting film that meets
the ASTM D6400 standard for commercial composting.* These revolutionary commercially compostable films are irreversibly changing the packaging industry. A Czech subsidiary of one of the world’s three largest car manufacturers wrapped engine parts in Eco-Corr Film® as an environmentally responsible substitute to reduce the amount of conventional plastic packaging they use.

To test if the film was able to be composted according to plan, the staff built compost bins near the plantThey tested Eco-Corr Film® as part of their new “green” logistics pilot project, packaging car parts for shipment to their plant in Pune, India. Several tests were conducted for compliance with strict conditions for transport in sea containers. Quality control did not show any damage or traces of corrosion on the components wrapped in Eco-Corr Film® upon arrival in India. After six months, the foils had largely disintegrated in the compost bins, helping them to eliminate plastic waste. Thus, Eco-Corr Film® showed that it could successfully replace previously used conventional plastic films and provide the same effective corrosion protection. They planned to use the composted packaging material as soil improver at the plant’s logistics park. The successful trial opened the door for the manufacturer to cut their amount of conventional plastic packaging in half, thus eliminating a significant amount of plastic waste (as much as 500 kg [1,102 lb] per month).

Large engine producers were experiencing corrosion problems during the export of automotive parts using seagoing containers. Time in transit from the manufacturer’s location in Montenegro to the engine assembly plants is typically two to four months. The traditional rust inhibiting oils did not prevent oxidation and pitting of the special aluminum alloy used to produce these hightech engine components. This resulted in significant losses from production delays and rejected parts. Based on laboratory tests, a pilot plant trial was initiated, which prompted the customer’s decision to implement a plant-wide, full scale implementation of BioCortec’s biobased EcoLine® Cutting Fluid to replace environmentally unacceptable rust inhibiting oils. The customer’s corrosion problems during storage and shipping were solved. The bearings, bushings, and thrust washers have shown no sign of corrosion, even after extended field testing up to twelve months. The important benefits are being able to deliver parts that are oil free, dry to the touch, and compatible with robotized assembly operations while using an extremely cost-effective corrosion protection method. EcoLine® Cutting Fluid enables our customer to demonstrate to their clients and local community their environmental sustainability and awareness.
Learn more about these products at https://www.biocortec.com/.