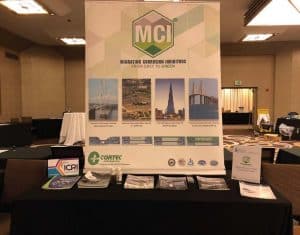 There was a great turnout this year at the 2019 ICRI Fall Convention in Philadelphia—both for ICRI (International Concrete Repair Institute) as a whole and for Cortec® MCI® as an exhibitor. The conference was larger than ever, with record attendance representing a full spectrum of players in concrete repair—from contractors and engineers to architects and manufacturers. Ashraf Hasania (MCI® Technical Sales & Market Manager, Canada), who attended the conference along with Jessi Meyer (VP, MCI® Sales), noted that interest in Migrating Corrosion Inhibitors was very strong, with “more people coming to our booth than ever”!

Cortec® continued to play an important role in ICRI committees, with Meyer participating in the Supporting Member Advisory Council (SMAC), the Corrosion Committee, the Marketing Committee, and the Life-Cycle and Sustainability Committee. She also enjoyed attending a Women in ICRI committee meeting with guest speaker Melanie Rodbart, a professional engineer who co-founded an architectural and engineering firm for historical restoration and is the founding chair of Women in Structural Engineering (WiSE) Philadelphia. “It’s just nice to see women succeeding in the industry and moving forward,” Meyer commented.

Hasania enjoyed taking in a number of technical sessions, all focused on the conference theme of historic restoration. Some sessions discussed corrosion inhibitors, but the majority went in-depth on the many different challenges that face historic restoration crews—spanning everything from the difficulty of color matching to working on restorations at museums that must stay open to the public.

Cortec® looks forward to following up with the many individuals who visited the MCI® booth during the November 11th-13th convention and anticipates seeing many familiar and unfamiliar faces once again at the 2020 ICRI Spring Convention, March 23rd-25th in Vancouver, BC!!!
Learn more about the upcoming event at: https://www.icri.org/event/2020-ICRI-Conveion