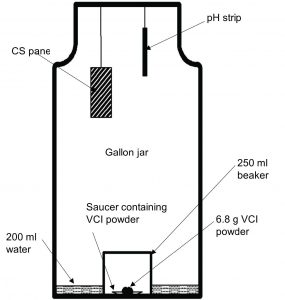 There are many reasons a company may need to lay up a piece of equipment long term (more than two years) and would like to minimize the number of preservation material applications required to achieve the desired length of protection. VCI powder, the purest form of VCI inhibitor, has been used for years to protect internal void spaces from corrosion. However, from time to time, Cortec® has received requests from potential customers for proof that VCI powder can indeed protect long term, questioning if VCI powder will lose its efficacy when continuously exposed to humidity or if VCI powder will turn acidic over time.

This investigation evaluated two VCI powders for more than four years in a humid sealed environment. It demonstrated that the VCI powders provided long-term protection with a single application and that VCI powders did not generate acidic vapor when exposed to moisture continuously.

Two different powders, VpCI®-609 and VmCI 307®, were evaluated in the configuration illustrated (at left) at a dosage rate of 1.5 oz./ft3 (1752 g/m3). Each test jar was tightly sealed (tape affixed tightly around the lid sealing it to the jar). Even so, there was some leakage as indicated by gradual loss of water at the bottom of the jar. After approximately two years, additional water was added to maintain the initial water level in the jar.

The evaluation lasted more than four-and-a-half years (February 2016 – November 2020) in an enclosed humid environment as illustrated in the diagram, where a carbon steel panel (C1010) was suspended in the vapor space. Testing was conducted at 104 °F (40 °C) from February 2016 to February 2019, and then continued at room temperature from February 2019 to November