As a leading provider of environmentally responsible solutions in the fields of packaging and metals preservation, Cortec® practices “circular economy” chemistry wherever feasible. Cortec® R&D tries its best to select biobased and renewable materials in its product formulations and boasts over 30
USDA Certified Biobased Products that meet mandatory federal purchasing requirements under the USDA BioPreferred® Program.* Cortec® also designs its products with an eye toward environmentally responsible disposal routes. Many Cortec® products have passed testing as biodegradable, recyclable, or compostable materials.

Packaging films contribute to many unfortunate pollution instances and are a burden to landfills. The responsibility falls upon everyone to reduce film pollution in the environment as the only habitat and sanctuary available to humankind! Responsible recycling is one route of environmental stewardship, and to this end, Cortec® has a popular recycling program that enables end users to send their eligible used VpCI®-126 Film and Bags back for recycling and reprocessing into fresh new VpCI®-126 Film. Composting is another route that can be convenient in some circumstances.
Here again, Cortec® is a pioneer in designing compostable films, such as Eco Film®, Eco Works®, EcoOcean®, and EcoCorr Film®,† for packaging customers at large, and for corrosion inhibitor customers in particular. With continued innovations at Cortec®, more compostable films with features appealing to a wide variety of applications have been introduced. This report surveys a few of the recent introductions and the laboratory composting studies conducted on them.

Eco Wrap® is a compostable general wrapping film applicable to all instances where a wrapping film is needed. This film does not contain corrosion inhibitors. The latest formula uses a certified compostable resin plus a tackifier additive to make an industrial strength compostable stretch wrap that can be used on most standard automated stretch wrap equipment.

* For more information about the BioPreferred® Program, go to http://www.biopreferred.gov.
† Most of these products are intended to be composted in a commercial composting facility operated in accordance with best management practices.
Check locally to see if such a facility exists in your community and if they will accept your specific product.

Eco-Corr Film® ESD is a commercially compostable packaging film that offers both corrosion inhibitors and a permanent anti-static agent. It is especially useful in applications where corrosion protection and ESD (Electrostatic Dissipating) protection are needed simultaneously, such as packaging of electronic components. It conforms to the NACE Vapor-Inhibiting Ability Test (NACE TM0208-2008). It does not have ill effects on the
solderability of PCBs and meets the requirements of IPC-J-STD-003C, Am1 (Edge Dip Solderability Tests).

The common characteristics among these diverse packaging films are that they are all made with certified compostable resins with functional additives, and they all meet standard characteristics for composting in industrial composting facilities. During the R&D of these films, laboratory composting was conducted to ensure the disintegration of these films met the standard on the compostable definition of plastics, a regulated claim (much like the regulation of the “organic” claim for food items).

In the United States, the ASTM D6400 Standard Specification for Labeling of Plastics Designed to be Aerobically Composted in Municipal or Industrial Facilities specifies the tests a film must pass in order to be called compostable for processing at municipal or industrial composting sites. In Europe, the counterpart of ASTM D6400 is EN 13432, Requirements for Packaging Recoverable through Composting and Biodegradation – Test Scheme and Evaluation Criteria for the Final Acceptance of Packaging. The two are very similar. In order to meet the compost disintegration requirements aspect of ASTM D6400, a plastic product needs to demonstrate that after twelve weeks in a controlled composting test, no more than 10% of its original dry weight remains after filtering with a 2.0 mm (0.08 in) sieve.

Thermophilic aerobic composting was conducted as follows (according to ISO 20200). Compost Medium: Purchased garden type of compost; mixed with yard and food waste. Testing Conditions: Temperature was 58 ± 2 °C (136 ± 36 °F) (in calibrated ovens #1 and #2); RH was 50-55% (in compost medium). Twice a week, the composting container was examined. The container weight was monitored, and lost moisture was replenished by spraying DI water. Progress in the film disintegration was photographed weekly. The testing was terminated when no film fragments were observable. 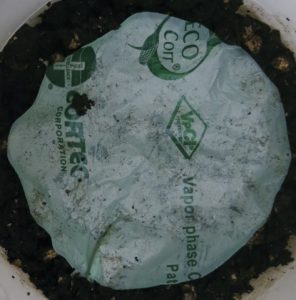