Participation at Croatian market and growing interest for corrosion protection encouraged Cortec Corporation marketing experts to attend this year’s specialized Crafts, Building and Anticorrosion Fair in Zagreb. A large number of visitors, and especially businessmen, proved it a great success. Even the CEO of the City Municipal Services Slobodan Ljubicic visited Cortec booth and was welcomed by Boris Miksic, President and CEO of Cortec Corporation.

NEW TRENDS IN THE PACKAGING INDUSTRY

The Seminar covered a broad selection of Packaging aspects ranging from "Legislation News" to "The Impact of Entrance to the EU", "V.I.C.O. Logic & Logistics", "Packaging Machines" and "Corrosion Protection".

Dario Dell'Orto presented "Cortec Integrated Solutions" describing the basic concepts and the corrosion protection mechanism of "VpCI" Vapor Phase Corrosion Inhibitors, as well as currently used worldwide applications. And, integrating the typical packaging products such as anticorrosion/antistatic films, papers, foams, emitters it was highlighted - under the concept of Total Corrosion Control - the use of cleaners, rust removers, temporary coatings. Moreover, in line with the Seminar's theme, the new generation of 100% biodegradable and biocompostable Eco films were featured.

Approximately 50 attendees including key Czech and Slovakia Industry representatives participated to the dialogue in a friendly atmosphere that facilitated the sharing of information and experiences.

The Seminar dinner was enliven by a wide selection of superb Moravian wines and an enjoyable "ensemble" of traditional music.

This Symposiums have been held since 1960 thanks to the dedication of Prof. G.Trabanelli, F.Zucchi and their Team at the Corrosion Study Centre “Aldo Daccó “ in the Department of Chemistry of the University of Ferrara.

As reported by the local newspaper “la Nuova Ferrara”corrosion costs to each EuropeanUnion citizen approximately € 250/year, which corresponds to 4,2% of the GNP for E.U.member Countries.

The Symposium was attended by a large representation of scientists from all over the world. Cortec has continuosly participated to the Symposium since 1975 with array of papers on Vapor Phase and Migrating Corrosion Inhibitors. In fact, the paper titled “Some aspects of Vapor Phase Corrosion Inhibitors for the protection of steel products “ by B.A.Miksic et all presented at 1980 SEIC has become a “classic “ paper referenced by researchers worldwide dealing with fundamentals of VpCI technology.

Dr. Margarita Kharshan and Dario Dell’Orto participated on behalf of Cortec Corporation. It is interesting to note that Cortec, represented by President/CEO Mr. Boris Miksic, was among one of the first Companies attending the Symposium already in the early 70’s.

Numerous papers related to the basic research of corrosion inhibitors, their reaction mechanism as well as their use in a vast variety of applications were presented.

Great interest was generated by the presentation of Dr.Kharshan on Cortec’s R&D Lab work on a new generation of Vapor Corrosion and Scale Inhibitors formulated from Biodegradable and Renewable Raw Materials.

The Symposium also offered an excellent occasion to share experiences with other researchers all having the common goal to “tackle and stop” as soon and as much as possible the devastating effect of corrosion. 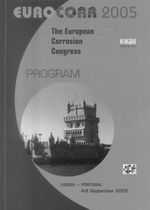 The European Corrosion Congress was held in Lisbon, Portugal, September 4-8, 2005. 2005 is a landmark year in the history of this Congress, since it coincides with the Golden Anniversary of the European Federation of Corrosion (EFC).

The increasing importance and interest was given to the concrete preservation and repair with two days dedicated to this topic.

Cortec VpCI 415 cleaner was featured in an interesting aeronautical application evaluated by the University of Northern California and presented by Dr. B.Bavarian.

The EUROCORR is hosted every year by a different European country. Next Congresses will be held: Maastricht - Holland - September 25-28, 2006 Freiburg - Germany - September 9-13, 2007