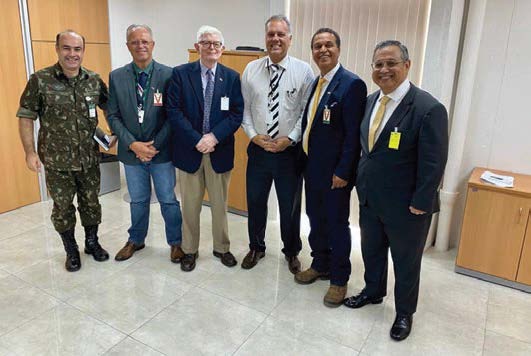 The meeting’s objective was to introduce VpCI® corrosion inhibitor technology and its specific use for military applications related to, among others, the maintenance and/or preservation of a wide variety of aircraft, tanks, and weapons of all calibers. To this end, Cortec’s experiences with Armed Forces throughout the world were discussed. A practical and effective rust removal demonstration was also carried out.
The meeting was very productive and Cortec’s information very well received. Consequently, it was agreed to perform in the near future a real demonstration on the maintenance of an Armored Tanks, Helicopters, and howitzers and rifles.

As a historical note, it’s worth mentioning that Brazil has a long tradition of military partnership with the United States: In World War II, Brazil sent an Expeditionary Force of 25,334 soldiers to fight in Italy shoulder to shoulder with the Allied armies. Initially comprising an infantry division, the force eventually encompassed all Brazilian military branches, which participated in the conflict with 22,000 troops, including the Brazilian Air Force, which did a remarkable job in the last nine months of the war with 445 missions executed.

According to Col. Ribeiro, Brazil’s Armed Forces are the second largest in the Americas after the United States, and the largest in Latin America, with 334,500 active-duty troops and officers. In terms of firepower, it currently ranks 18th globally. Moreover, Col. Ribeiro painted the following picture of the Brazilian Army in numbers: 469 main battle tanks; 1,850 armored vehicles; 2,150 artillery pieces; 280 self-propelled artillery; 220 surface-to-air missile systems; 38 river boats; 21,000 other military vehicles; and 90 helicopters.

The Brazilian Army has recently released its strategic plan paper covering the period from 2020 to 2023. The document directs the force’s investment effort over the next four years, continuing the army’s transformation process.
During the meeting, a real interest was shown in a close cooperation between the Brazilian Army, Cortec®, and their representatives to prepare and implement a well-structured plan that will include the use of VpCI® corrosion protection products and systems, technical assistance for their application, and registration of the tested products according to the Brazilian Army protocols.

In a very fortunate coincidence for the follow-up of this program, just a few days later on March 8th, 2020, the United States and Brazil, represented by President Donald Trump and President Jair Bolsonaro, signed a military cooperation agreement inside the U.S. Southern Command. Admiral Craig Faller, commander of United States Southern Command, defined the agreement as historic and capable of expanding the sharing of experiences between the two countries.

Finally, on behalf of Cortec’s team, I would like to express my sincere gratitude for the time and availability of Lieutenant General Flavio Lancia, Brigadier General Denis Taveira Martins (Retired); Col. Decio; and Col. Ribeiro (Retired); as well as for their interest in our proposed anticorrosion technology shared in a very proactive session.